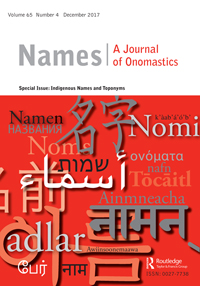 This paper is concerned with onomastic palimpsests in Victoria, Australia, focusing in particular on the 1870s, when the deliberate erasure of colonial names and their replacement with Indigenous names was at the forefront of government policy. In contextualizing this reinstatement of Indigenous toponyms, the paper highlights the agency of parliamentarian and government minister Hon. Robert Ramsay. The primary sources of data are newspaper articles and official government reports. The methodology used is “thick description”. The findings reveal that the government’s efforts were grounded in the collection and collation of place names and vocabulary from Aboriginal people in the previous decade by district surveyors and other local officials. Consistent with recent campaigns in Victoria, the sustained efforts by governments in the 1870s were driven by a desire to remove duplication, erase inappropriate non-Aboriginal place names, and preserve Aboriginal place names. The campaign is unparalleled in the history of Victoria’s toponymic administration.