Renaming Me: Assessing the Influence of Gender Identity on Name Selection 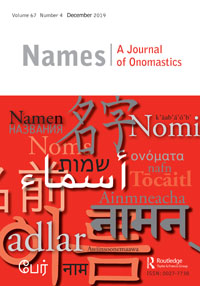 Our identity is our name connected with a specific face and body. Yet, our name, a critical aspect of the “names-body-identity” nexus is rarely self-selected. The naming of a newborn is often the purview of family and the name selected is often linked to the sex assigned to the child. Assigned sex, however, may differ from gender identity. Renaming, the process of selecting and using a new name, can be instrumental in expressing an authentic gender identity. Thus, gender identity and renaming were examined among transgender and gender nonconforming (TGNC) adults using an online survey. Participants indicated that the recognition of their gender identity often involved the renaming of self or the use of a new name reflective of that gender identity. Several factors influenced name selection including input from familial sources. This exploratory study offers insight into the connection between gender and naming strategies in an adult TGNC population.