Unforgettable: The Lives and Passing of Three US American Onomastic Icons 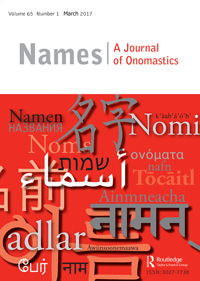 Through its sheer volume, the US baby-boom generation brought with it many profound, changes in the US American society. However, the dynamism of this generation cannot be explained solely by its numerical magnitude. The individuals who emerged as the cultural leaders of this generation also demanded widespread systemic changes to the world they had inherited. Rather than meekly conforming to the pre-established norms of a power elite, they demanded revolutionary changes to the pre-existing hierarchies that had systematically disenfranchised women and people of color both at home and abroad. One of the primary tools of this counter-culture was names and naming. This article examines the onomastic legacies of three recently deceased leaders of this protest generation. As will be shown here, their struggle for personal, professional, individual, and social independence continues to serve as an unforgettable role model for today’s generation and beyond.